This page was heavily influenced by the Central Geelong Wall Art Trail. We decided to create an informal guide to feature other street art we found in the CBD area.

Want more? Check out our guide our separate blog dedicated to street art and graffiti at GeelongStreetArt.com. There is information on the artists, past artworks and graffiti precincts.

Piece by Ayrlie Lane Artistry. Located at the Little Malop Street entrance that is next to the toilets.

There is more artwork to be found inside Market Square. You can find a second Ayrlie Lane piece on the third floor.

There are a number of hidden pieces in this laneway.

Located at 12-14 Union St. This mural is by Danielle Weber. 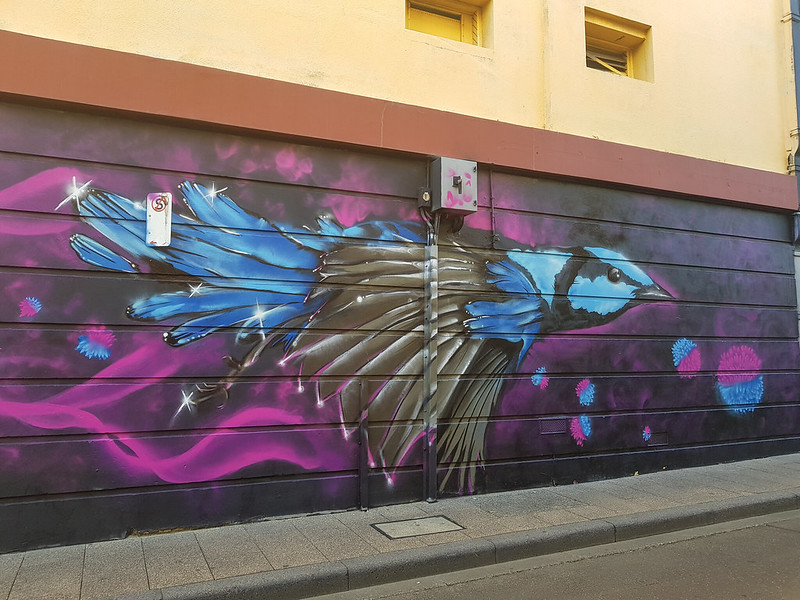 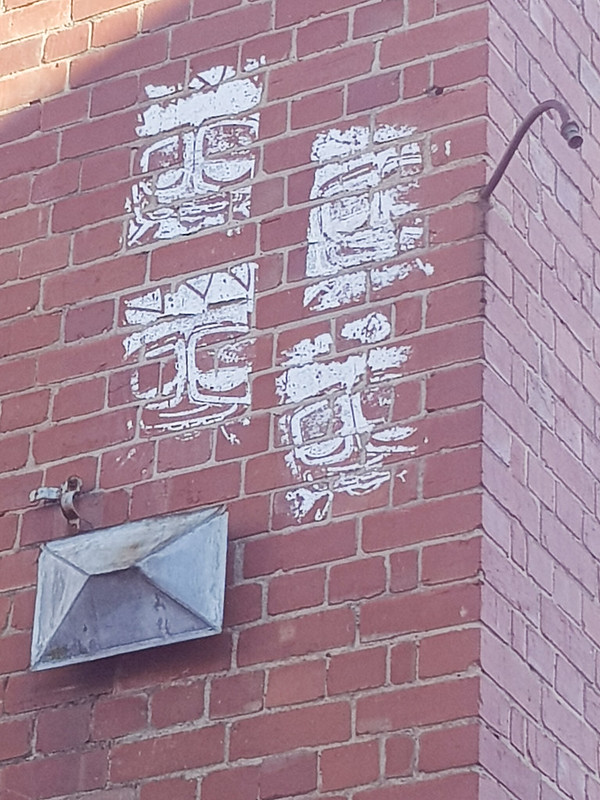 This piece is about 3 metres up on the wall. You can find it on the first red brick building on your left. 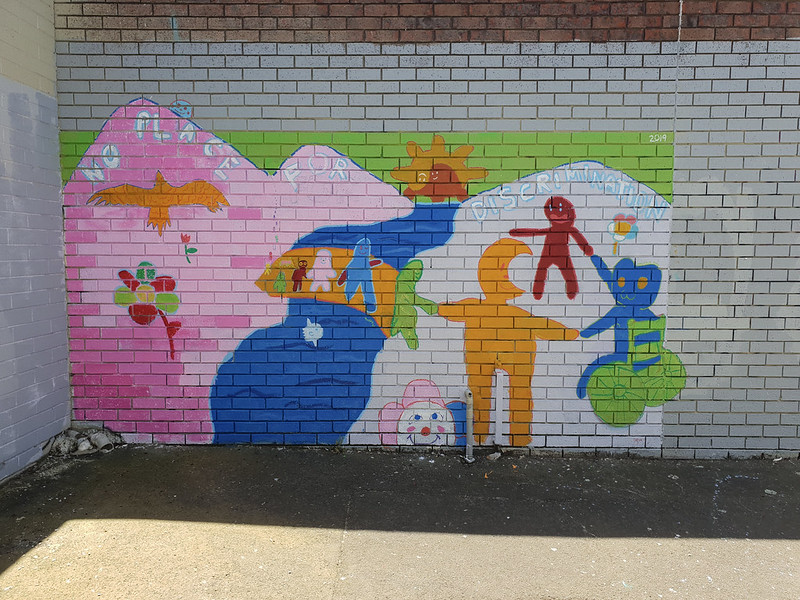 Willem Baa Nip (also known as William Gore and King Billy) was a member of the local indigenous people, the Wadawurrung (Wathaurung).

Willem Baa Nip (King Billy) was well respected, considered a learned man and became the spokesperson and negotiator for his own mob with the Europeans.

This piece is by Glen Smith.

The mural acts as a platform for a digital augmented reality experience through the free Geelong Arts and Culture Trails App.

After downloading the App, simply point your iPhone or iPad camera at the right-hand poster on the mural – a hidden window reveals a room from the 1980s while you listen to one of The Divinyls’ classic hits.

Moi-Yo Miller is the face of the latest public art mural found on the corner of James Street and Minns Lane.

Geelong born Miller was considered the most beautiful woman in Australia in the 1930’s when she travelled the world as the Great Magician Dante’s assistant. The mural is the final part of the City’s 5GID Street Art project.

At the lane entrance opposite John Street. If you look close, you can see hidden artwork by myheadsajungle 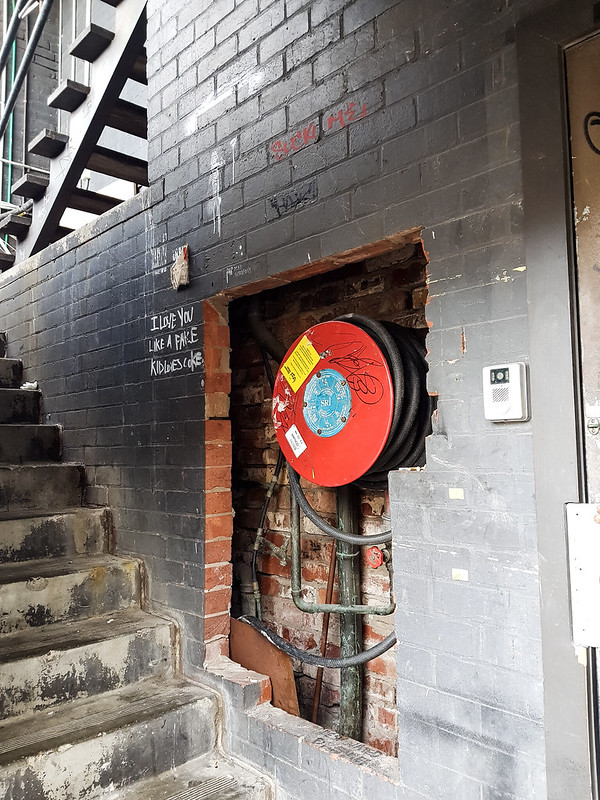 This piece can be found in a hidden opening. Walk along Minns Lane from James Street. Look on your right. If you have a look inside, you can see tiny phrases and designs on the wall.

You can see more of the artwork here.

As it is secluded, keep an eye out for any glass.

This piece is by artist Baby Guerilla.

This piece is by artist Scott Jansen. People love posing in front of it during busy times. 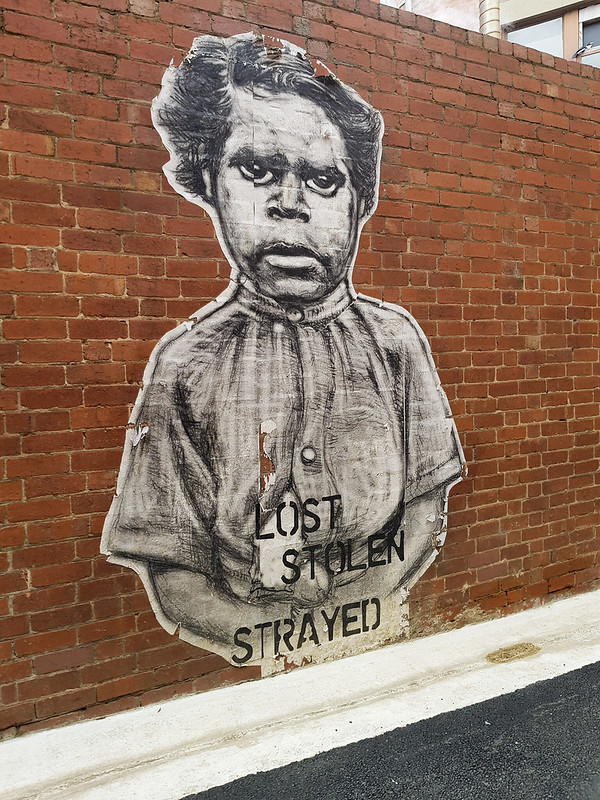 You can find this piece by walking to the end of Shorts Place, on the Malop Street side.

There are two pieces on John Street that are viewable as you walk up James Street.

This piece is by Laura Alice. It is on the side of the Karingal Gallery.

She added some paste up artwork in the nearby side streets during July, 2019.

This artwork is by Kinyobi Designs. It is on the side of Barwon Booksellers

If you walk down John Street, you will arrive at Downs Place. On a corner building, you can see three paste ups. I believe they are by Josh McCrimmon.

If you walk further along Downes Place, you will see this informal piece. It is a bit faded.

The End Is Near 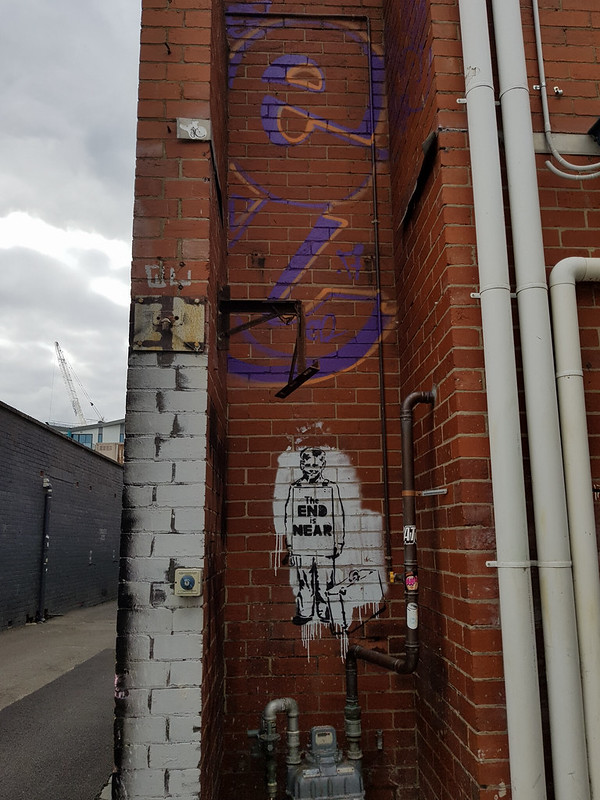 This piece is well hidden. Walk up the laneway between the Westend Restaurant and The Workers Club. At one point on the left a wall stops, and there is a gap. Look around to find the red bricks. You’ll notice this hidden if you look back towards Little Malop Street.

The artwork is by Glen Smith

It is hard to describe. If you need extra help you can view the area on Google Maps. 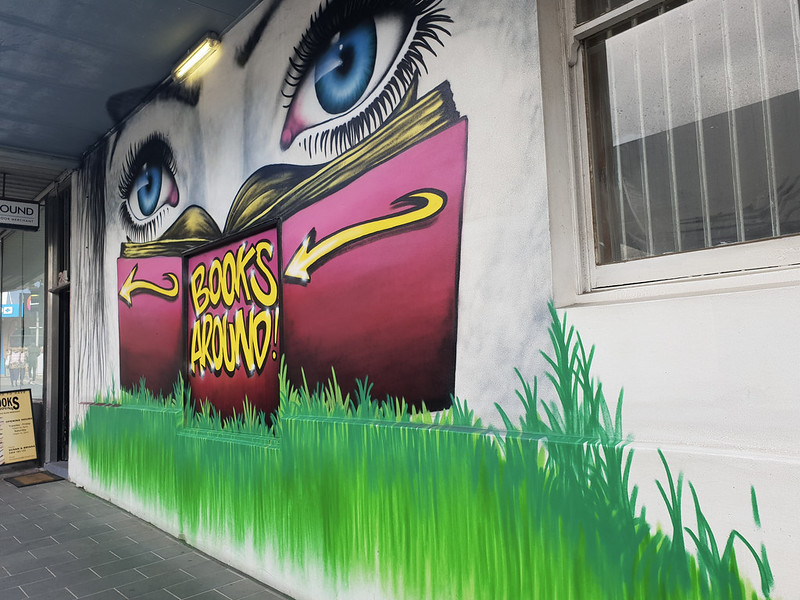 This is at the front of the Books Around shopfront at 24 James St. The art is by Jony Dee.

You can find more images here.

The Very Hungry Caterpillar/Storybook Mural is by artist Michael Cassar, and can be found in the Civic Centre Car Park through the Gheringhap Street entrance.

The Jungle City Mural is by artist Tina Mose. You will find it in the Civic Centre Car Park, enter via the Lt Malop St cnr of Gheringhap Street entrance. 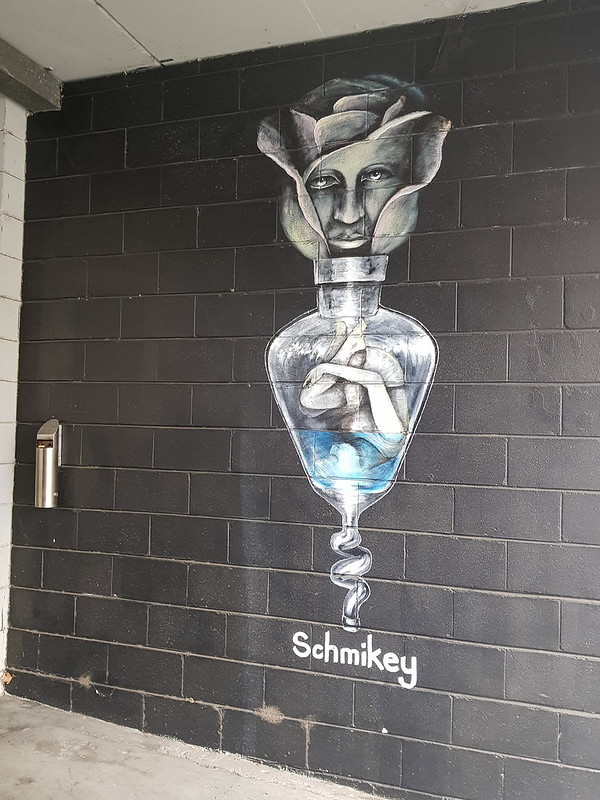 This surrealist painting is called the Sleeper and was painted as part of the 2018 Geelong After Dark festival. It can be found on the car park entrance at the intersection of Little Malop Street and Gheringhap Street. 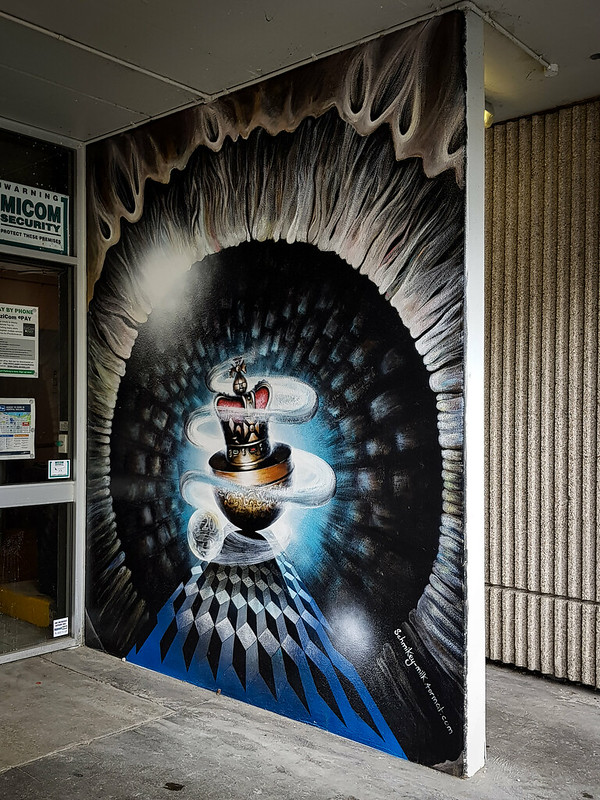 This piece can be found at the car park entrance that is in between 71 Little Malop Street and the Geelong Dance and Fairywear Supplies shop.

This is part of the Life Underground trail. 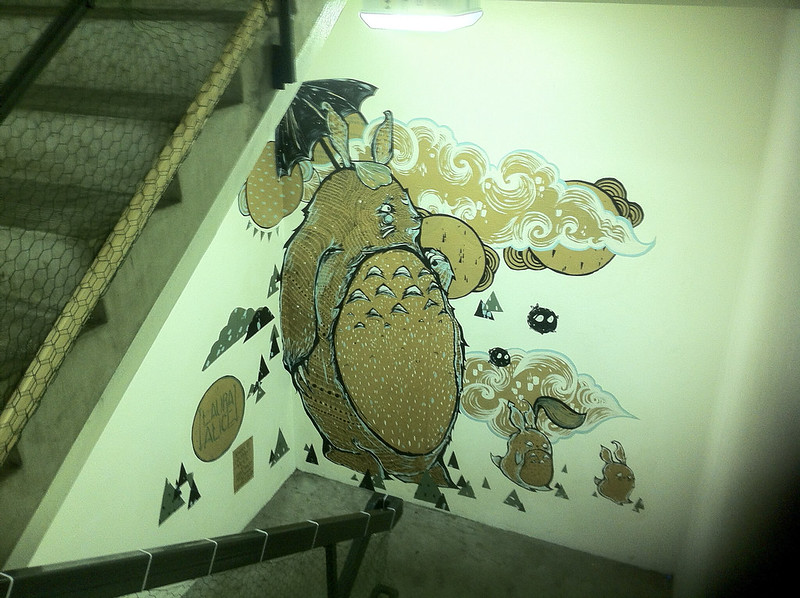 There is some very cute artwork in the stairwell of the car park, but it can be tricky to find. Walk in the entrance near the Schmikey Milk #2 artwork. Walk to the nearby lift and take it to the third floor. Next to the lift is a stairwell that goes down to the ground floor. The walls near the stairs have artwork on them by Laura Alice and some Gordon Tafe students.

Make sure to keep an eye out for cars at all times.

This evocative and moving comission is a tribute to the maritime history of Geelong as a major port. The life of a Mariner is not always easy, this mural seeks to capture the life and tales of an “old man of the sea”, a face that has been weathered by time and the elements.

You can find this down the laneway stairs of 65 Brougham Street.

Art by Cam Scale. You can read a cool interview with him here.

This mural is on the back wall of the Novatel hotel building. Art is by Scott Jansen. 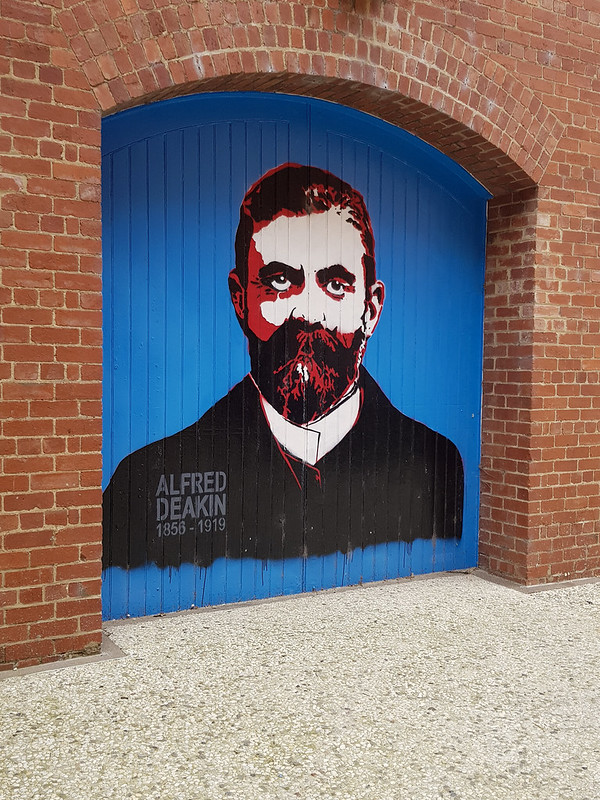 This can be found on the Deakin Building at the Corner of Brougham Street and Cunningham Street. It’s not visible from the street though. It’s close to the entrance up the steps.

The artist is Jack Herd.

The above piece can be viewed from the car park next to the Bear And Bean Cafe. I’m unsure of who the artist is.

Wright Place technically isn’t park of the car park, but is still very close. One one of the walls near the walkway to Ryrie street has a large piece by Glummo. There is also separate artwork in the walkway itself. 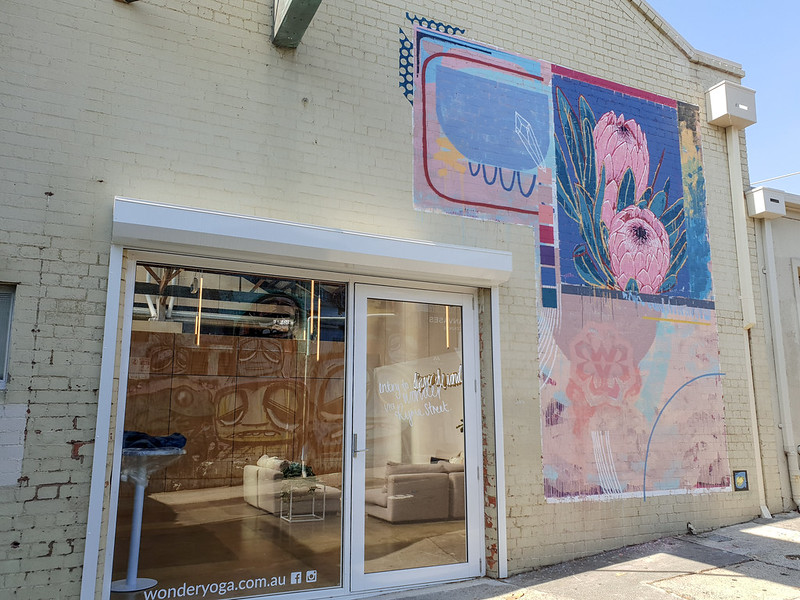 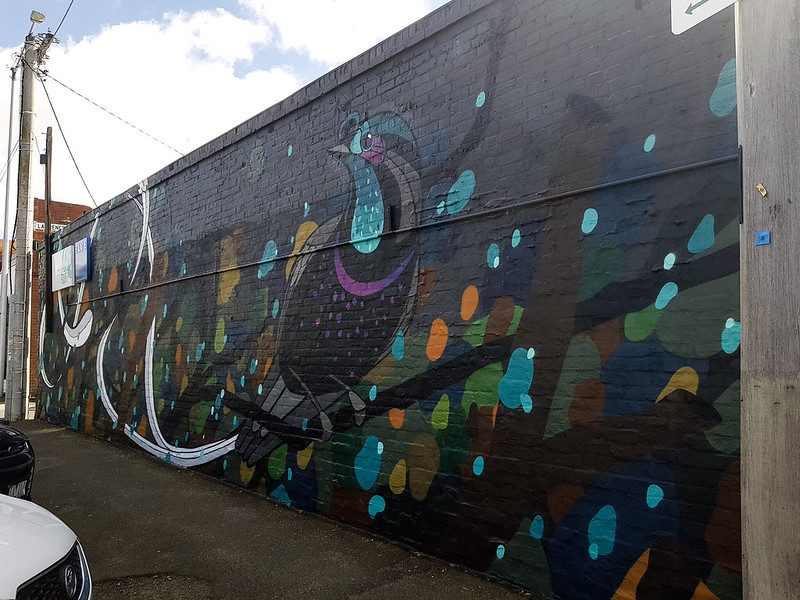 This piece, by Scottie Neoh, depicts the Ribbon Tailed Astrapia, set in a forest landscape that is being destroyed. It is part of the Wings Of Paradise campaign by Greenpeace to raise awareness of the impact palm oil has on deforestation.

This piece is on the side of the former Diversitat Wholefoods building. This artwork is by Mike McLean 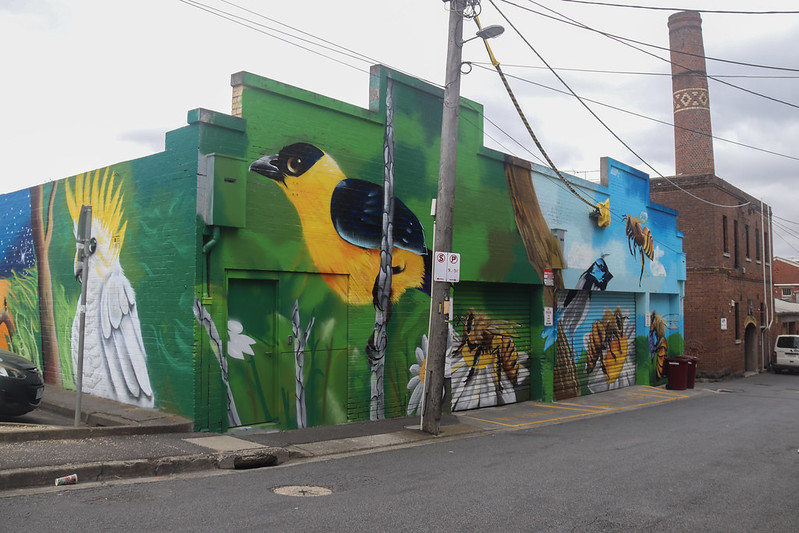 You can check out the progression of the piece here

This piece was commissioned as part of Storyfest. You can find it at Level 1 of the library. This is the children’s section so you have to press the green button to enter. You may also have to be patient as kids wander close to the mural. The artist is Scott Jansen.

This piece is on the left side of the GPAC building if you are viewing from Little Malop Street.

A constantly changing mural on the side of the building. Accessible via Gheringhap Street.

This area was painted over again in January, 2020. 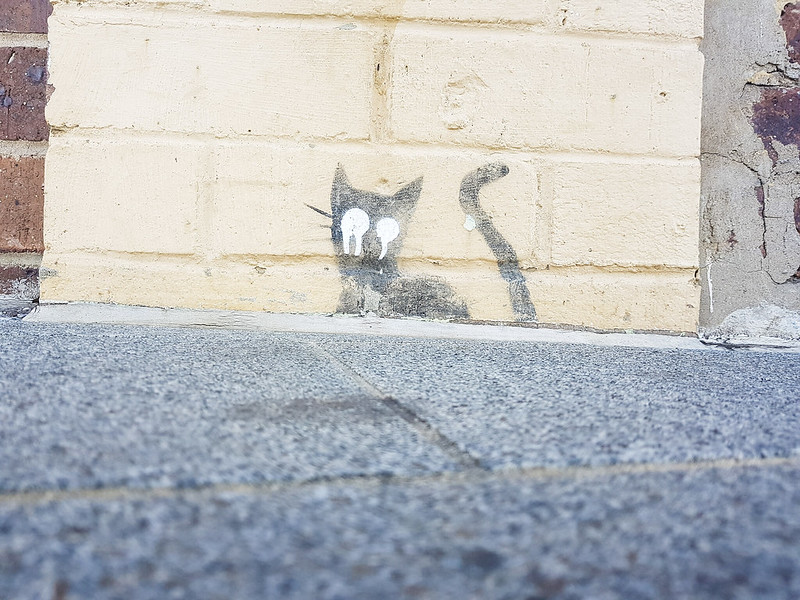 There is a tiny unofficial cat artwork outside of the train station. It is close to the pathway between the carpark and the bus depot. 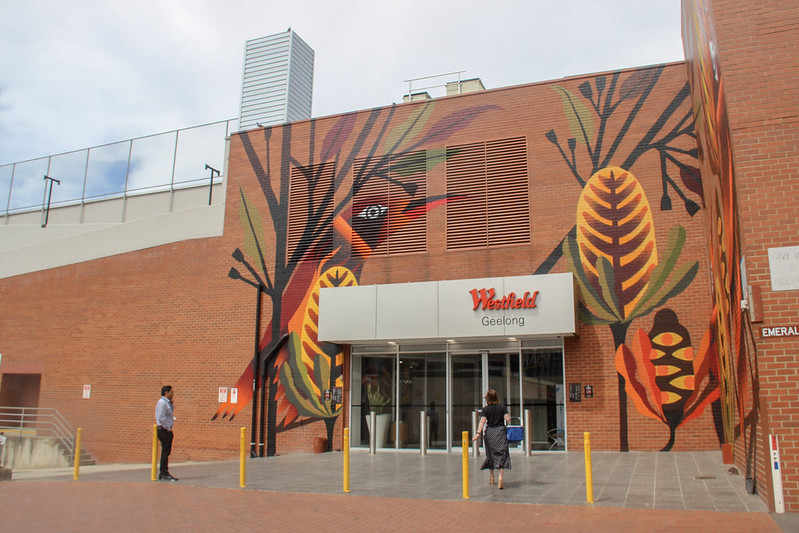 This artwork is by Al Stark

The restaurant is located at 239 Moorabool Street. You can’t see the artwork from here, though. You have to walk around the corner to Myers street until you come to a carpark next to the MSY Technology building. If you walk into that car park (keeping an eye out for cars), you can see the piece. 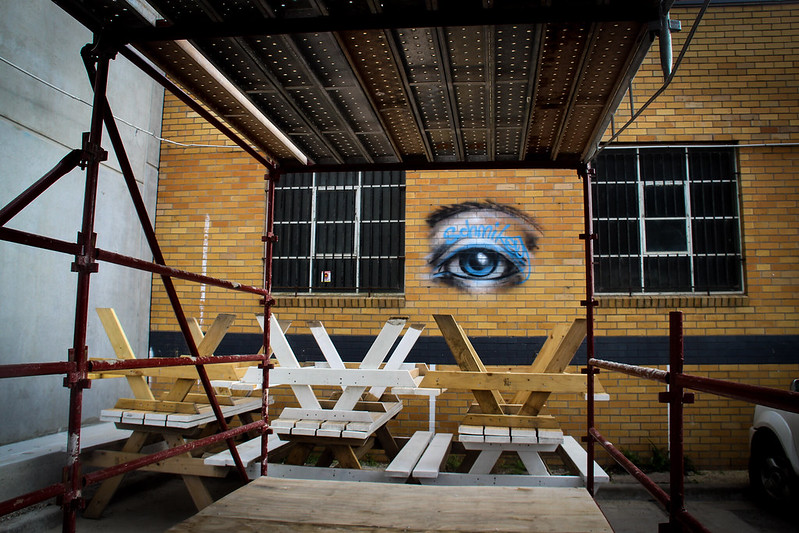 This artwork is in between the Worksafe building and The Rheingold. It can be a bit difficult to see unless you get close.